Initially invulnerable, these fiery beasts seek the separate the Hunter from her eagle companion. Returning light to the obelisks in the spirit's domain will make it vulnerable, allowing the Hunter to defeat them and gradually lift the dark curse afflicting the world.

There is no "game over" mechanic in The Pathless, but losing to the spirits can cost crystals that help the eagle carry the Hunter farther across the island.

There are a total of five corrupted spirits, being the cursed versions of the five Tall Ones.

Cernos is one of the Corrupted spirits and inhabits the Forest Plateau.

Sauro is one of the Corrupted spirits and inhabits the Redwood Steppe.

Nimue is one of the Corrupted spirits and inhabits the Great Plains.

Kumo is one of the Corrupted spirits and inhabits the Mountain Tundra.

The Eagle Mother is one of the Corrupted spirits and is encountered on The Floating Island.

These Corrupted versions of the Tall Ones roam the lands in a giant, spherical firestorm. It can swell and engulf The Hunter, resulting in the eagle being blown away. The Hunter then has to save the eagle in a stealth section. Each Corrupted Spirit has their own style in these sections. The Hunter has to stay still or out of sight whenever the lights coming from the eyes of the Corrupted Spirits are pointed at her. Moving in the light (both the beams and a circle around their bodies) will result in them seeing The Hunter. They will then attack, throwing her out of the storm. This results in a loss of Crystals. If The Eagle is retrieved without detection The Hunter is transported out of the storm and it moves to another location. 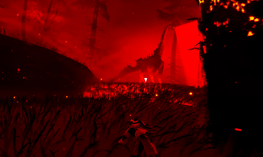 - Cernos has a straight forward vision coming from their one eye in front.

- Sauro has a larger cone as he looks from higher up.

- Nimue has smaller cones but multiple due to her multiple heads, which all look in different directions and move erratically.

- Kumo has a large cone and large circle surrounding him as well as fast movement speed, resulting in a large portion of the field being covered.

Once all three Obelisks have been rid of the curse and lit, their light weakens the Corrupted Spirit, forcing the storm to the center. The spirit will be found inside, constantly running away from The Hunter. The Hunter must then chase the beast in order to shoot the eyes on the sides of their bodies and bring them down. During these chases, each of the spirits uses different tactics to slow The Hunter down. The Chase is divided into two sections. In the first the spirit mostly runs and creates fire pools on the floor, sometimes hurling fireballs at The Hunter. In the second, the spirit starts creating shockwaves, dropping meteors or giant fireballs to prevent The Hunter from catching up.

- Cernos throws a set of fireballs that The Hunter must dodge.

- Sauro throws giant fireballs that explode upon impact and create a shockwave The Hunter must jump over.

- Nimue throws a large volley of fireballs to cover a large area.

- Kumo throws fireballs and makes meteors fall from the sky, creating circles that show where they will fall.

After destroying all the eyes covering the Corrupted Spirit's body, The Hunter and the Spirit move to their respective arena in each area. Here the Corrupted Spirit fights The Hunter in a battle with multiple phases and mechanics. Each fight is radically different and they all require The Hunter to learn how to react to attacks. When The Hunter gets hit multiple times or knocked back due to a mechanic they are pushed out of the arena and have to return to it to continue.

- Cernos fights The Hunter at The Colosseum.

- Sauro fights The Hunter at The Theatre.

- Nimue fights The Hunter at The Thermae.

- Kumo fights The Hunter at The Forge.

- The Eagle and Godslayer fight The Hunter on The Spire.

Retrieved from "https://thepathless.fandom.com/wiki/Corrupted_spirit?oldid=337"
Community content is available under CC-BY-SA unless otherwise noted.